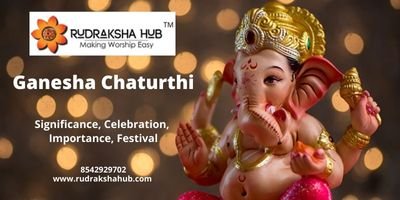 Ganesha Chaturthi is India’s most awaited festival every year to celebrate the birth of Lord Ganesha, the God of wisdom, knowledge, and new beginnings. It is a celebration of ten days to mark the presence of Lord Ganesha and his 10 days on Earth to relieve all his disciples from pain, worry, agony, and all other problems. It is believed that Lord Ganesha was the favorite God amongst everyone due to his wit and his usage of the power bestowed upon him. This made him a very likable and gullible God of all goods and no evils. He is worshipped as the son of Lord Shiva and Goddess Parvati. He is the pioneer God of Hinduism.

Shri Chatrapati Shivaji Maharaj, the ruler of the Maratha and Vidarbha region was keen on improving the knowledge of his people about religion and Hinduism culture. So he used to celebrate this festival in great stride and involve every Maratha clan in celebrating this important aspect of Lord Ganesha's visit to Earth for 10 days. This became an emotion for a lot of native Marathas and they started believing the fact that Lord Ganesha was the flag holder and the official guardian of the Maratha clan. This spirit of Hinduism was subdued under British rule. So in the late 1800s and early 1900s, when Bal Gangadhar Tilak needed a reason to collect a mob amidst curfew times to plan a revolt against the ruling Britishers, he revived the spirit of religious celebration in the people. This gave a reason to the people to do something of grandeur while diverting the minds of the ruling Britishers from the planning done to overrule them forever. It became a ritual ever since and more than just a festival or just another celebration, Ganesha Chaturthi became a household sentiment, especially for the Maratha sect.

Ganesha Chaturthi is also celebrated to mark the descent of Lord Ganesha on Earth to free his devotees of every fantasy and desire (Maya and Moh) as well as impart knowledge of life and its rules. Since Bal Gangadhar Tilak was from the Maharashtra area, a lot of Marathis connected with him and majorly, this was why more Marathis followed his footsteps than others. The celebration of Ganesha Chaturthi however ignited the feeling of nationality in a lot of people and slowly, following the trend of Ganesha Chaturthi, a lot of other festival celebrations also started to pick up, thereby increasing the feeling of freedom struggle in the hearts of Indians.

Lord Shiva and Goddess Parvati were taking a round of the Earth in order to make sure everything was going as per the rules and there was no one who was in pain or difficulty. After a long time of walking and helping people, they finally were returning to Kailash Parwat, their home. When they reached back, Goddess Parvati asked Lord Shiva to find something to cook while she was going off for a bath. She was not sure what to do to guard the gates as Lord Shiva was gone, so she created a statue of mud and sprinkled life into it. She named this child of hers Ganesha. This marked the birth of Lord Ganesha. The day is hence celebrated as Ganesha Chaturthi. But this is not where the story ends. There is more to the story. Goddess Parvati had instructed Lord Ganesha to not allow anyone to enter the house premise without her permission.

When Lord Shiva returned from the food hunt, he saw a new child sitting at the door, guarding it. Since it was an unfamiliar face, he ignored the child tried to move past him inside the house. Lord Ganesha was also not sure of the person who was trying to enter his mother’s house, so he tried to stop Lord Shiva. When Lord Shiva was stopped from entering his own house by an unknown kid, he could not control his temper and he pulled out his sword to kill the child. Lord Ganesha also was ready to fight but did not allow Lord Shiva to enter the house. When there was no other way, Lord Shiva cut the neck of Lord Ganesha away from his body and stormed inside the house.

Unknown to all this, Goddess Parvati came out after the bath and headed straight to the kitchen. She made food for three people and when she started calling out loudly to her newborn child, Ganesha, then Lord Shiva told the entire scenario to her. This time, Goddess Parvati lost all her calm and she went into a zone of anger and rage. She took the form of Goddess Kali and asked Lord Shiva to rectify his mistake or be ready to see the end of the world. Lord Shiva did not know what to do. He instructed everyone who had gathered around to find a child who was not near his mother and bring the head of that child to him as soon as possible. When the people went out in search, the first child they saw, who was sitting away from his mother was an elephant and thus, they cut his head to bring to Lord Shiva. Lord Shiva read the mantra and established the head of the elephant on the body of Lord Ganesha. He then said a Pran-Pratishtha mantra to bring life into the idol of mud and flesh. This was how Lord Ganesha was reborn on his birthday in two forms.

It is therefore believed that any idol, which has to be worshipped by bringing life into it has to be done with the Pran-Pratishtha mantra. This makes the idol a real form of God in 3D at that place. Also, after this, Lord Ganesha was named Gajmukh in the God community. This day is hence celebrated as the day that can bring life into the dead and can make the dullest and lifeless things to the best of their form. After this, Lord Shiva and Goddess Parvati stayed for another 9 days on earth, and then they went to heaven forever with Lord Ganesha thus, that day is called as Ganesha Visarjan.

Where is Ganesha Chaturthi celebrated?

Ganesha Chaturthi is celebrated in the Maharashtra region of India with great grandeur. Ganpati Bappa is considered the guest for the time being and is welcomed with a lot of love and support. It is also celebrated in other parts of India like Madhya Pradesh, Gujarat, Telangana, Andhra Pradesh, and some parts of Goa and Delhi. After 10 days of worshipping the idol, it is respectfully submerged in the oceans, as they are considered a direct link to heaven via zenith. It is believed that after 10 days, Lord Ganesha goes back to his parents in heaven with a promise to be back next year again and bestow lots of love and happiness on his devotees.

When is Ganesha Chaturthi celebrated?

How is Ganesha Chaturthi Celebration done?

Ganesha Chaturthi celebration is done by bringing in the idol of Lord Ganpati on the evening of the day previous to Lord Ganpati’s birthday. On the first day, after taking bath, everyone worships Lord Ganpati with a lot of music, dance, and festivities. The idol is placed on a platform and then the Pran-Pratishtha mantra is spelled on it to bring it to life. Then, in the next ten days, a Shadashopachara Pooja (a Pooja of 16 ways) is conducted in a traditional manner. After this, a huge platter of Bhog (food offerings, majorly sweet and savory) is offered to God. Every day, everyone worships Lord Ganesha before starting with the daily chores of the household. On the evening of the 10th day, a huge procession is carried out in which the Ganesha idols from all the places, houses, societies, and other establishments are taken with dance, singing, and happiness to submerge the idol in water and let it reach their destination. This is done to bid goodbye to their guest of 10 days and it is believed that Lord Ganesha promises to return every year and bless his own people.

The common slogan that people say while welcoming Lord Ganesha on Ganesha Chaturthi is:

(Oh hail Lord Ganpati, the keeper of all goods and the literal presence of blessings and happiness)

When the idol is being taken for bidding farewell, a very common phrase said in Marathi is:

We at Rudraksha Hub understand the quality of sentiment people hold for Ganesha Chaturthi. During the unfortunate time period of Covid-19, all public outing was banned, leading to people being forced to worship Lord Ganesha's idol at home and submerge it in a water body at home only. Since there was a logistical issue in this, we came up with an eco-friendly Ganesha idea. We provided our customers with a Ganesha idol made of clay from the Ganga bed. This was one of the most fertile soils for agriculture. We also gave seeds and the Pooja method with the idol. This will allow the people to worship the idol, then place it in a pot, water the idol, put the seed in the slump, and grow a plant out of it. This way, the guest of Ganpati will remain in the form of a plant and the person will be able to become a plant parent as well. This initiative became very admired and a lot of people accepted this model of worship in times of need, till the world did not open up.

To book your eco-friendly Ganesha, kindly check out our website here.

We will keep coming up with new and informative blogs every few days. Till then, take care and stay tuned to Rudraksha Hub